Thanks to the ranking of female authors in RePEc, we have long known the share of women in the RePEc sample of more than 50K authors: 19%. We now know also the shares of women economists by country, US state, field of study and PhD cohort. The following table shows for the largest countries their relative size and the proportion of women in each. European countries are doing better than the world average, especially Latin and Eastern European countries, while Anglo-Saxons are the most masculine (is it that relatively higher salaries for the profession in Anglo-Saxon universities attract the most competitive men?). Latin America is generally below average (except for Colombia and Argentina) while Asia has very low shaes of female economists, with less than 6% in Japan, China and India, and 9% in Pakistan (you can sort by column in the link).

The figures by cohort year of doctoral students in economics do not allow much optimism for the future, as shown in the graph below. In terms of fields of study, women are more present than before in all disciplines, but there are more masculine fields than others: finance (10.9% of women), time series (11.4%), sports economics (12.2%)… The most feminine: demography (37.7%), tourism (34%), Eastern economies (33.4%, likely due to the higher share of females in those countries). 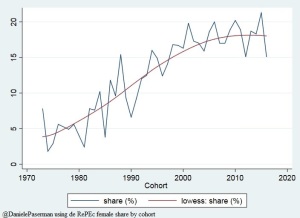 IDEAS also lists the RePEc economists active on Twitter (over 1000 registered). While women represent 19% of the RePEc authors, they are only 14% in the Twitter subsample. Looking at the Top 25% of this list of RePEc/Twitter economists by number of followers (3rd row), the proportion of women falls to less than 13%. In fact, the total audience of these women among the top 25% is a little over 3%. The table also provides the names of the most followed female economists on Twitter: only eight are ranked among the top 100. The lack of women at the top is also apparent in the rankings based on the quality of publications and citations that RePEc releases: only two appear among the world’s top 100, Carmen Reinhart and since recently Asli Demirguc-Kunt. The following figure gives some statistics about the top economists in some of the countries with the most registered economists. Again, European countries outperform Anglo-Saxon ones in terms of women among the top 100.

There is a lot of literature documenting this gender bias in the economics profession. These latest RePEc data complement what is well known, allowing international, thematic and temporal comparisons. See also the nice interactive representation of the RePEc network that Christian Mongeau makes by gender.

A group of RePEc volunteers met last month in St. Louis and discussed for two days all sorts of issues. Over the next months, users will notice changes resulting from that meeting. For starters, we have

Speaking of Twitter, we have now listings of economists on Twitter by country. In more regular business, we have counted 567,065 file downloads and 1,920,977 abstract views and welcomed the following new archives: Bank of Korea, Fondazione Luigi Einaudi, Journal of Mechanism and Institutional Design, National Bank of Ukraine, Gebze Technical University, Pontificia Universidad Católica de Valparaíso, and Universitas Gadjah Mada. As for the milestones we have reached, we have