A few day ago, RePEc reached a major milestone by indexing over 3 million research items: journal articles, working papers (pre-prints), books, book chapters, and software components. The graph below, taken from the LogEc website and not yet featuring the December 2019 numbers, shows the evolution of the RePEc index since its start in 1997 (click on it to view a larger image). 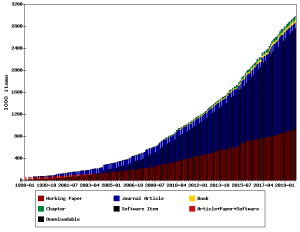 This graph shows that RePEc content continues to grow relentlessly. With all major publishers participating in RePEc by now, the growth now comes much less from new archives but rather from the continuous growth within the over 2000 participating RePEc archives featuring over 5000 working paper series, 3500 journals, and more. As economists would say, we have shifted from the extensive margin to the intensive margin, which can explain a slight decrease in the growth rate over the last few years.

The first statistics at the end of January 1998 indicate an index with 51,984 entries. The first million was reached in January 2011, the second in December 2017, and the third now in December 2019. Only two years for the last million!

If your publishers or your local academic or policy institution still does not participate in RePEc, it can join by following these instructions, or you can upload your works as an individual contributor at MPRA.

This entry was posted on Thursday, December 12th, 2019 at 3:21 pm and is filed under Bibliographic features in RePEc, Dissemination of research in Economics. You can follow any responses to this entry through the RSS 2.0 feed. You can leave a response, or trackback from your own site.